Here I am with another TR. This trip was intended to celebrate our 5 year anniversary … or 5th honeymoon as I like to call it. 🙂

The research and planning took quite a number of months. At first, we decided we would go back to the Philippines, then hop to Singapore, Frankfurt and home. As the months dragged on, I started to think about other places. Mrs.Injian was not too keen on Philippines since we already went there for our 1 year anniversary. In my continuing effort to practice the “Happy Wife, Happy Life” mantra, I started to look at other places. Fiji was a good place but would have blown my entire budget in one go and based on other TRs, Fiji Airways looked meh.

Looked further down on the map and saw this lovely continent called Australia. Mrs.I always wanted to go to Australia – it was second on her bucket list after the UK. Since New Zealand was nearby, I figured we could do a quick stop. My bucket list has and always will be Asia – I could go there for the rest of my life and could not be bothered about visiting other countries. We have never been to Bali and Singapore together, so that was an easy decision. A last minute recommendation from a fellow FT-er included a stopover in Tokyo for 20 hours. So I pulled the trigger and decided we would go to these 4 locations – the best part of it all … she didn’t know I made the executive decision. As far as she knew, we were still going to Philippines, Singapore and Frankfurt. 😉

The flights were a combination of F, J and Y on various airlines. F and J were booked using Aeroplan, Krisflyer and Alaska Airmiles plus taxes i.e. scamcharges. After much back and forth, humming and hawing, the flight itinerary was booked as follows:

In addition to adding pics about the flight and hotels, I will also include our excursions.

As the F and J flights were being booked, every effort was made to not send automated emails to my wife’s email account with the ticket confirmation – the locations were being kept a surprise. As much as you try, the robot overlords always manage to win – the confirmation for Singapore Airlines flights were sent to her account. When we came home from work one evening, she showed me the emails on her phone and asked me what the emails were. Before I could say anything, she opened the attachment …

*Wife reads confirmation email*
Wife – “It says Australia … why does it say Australia?”
*Inside my head – CRAP CRAP CRAP*
*Wife looks at me*
*I give her an innocent smile*
*Wife reads email again*
Wife – “Wait … are we going to … AUSTRALIA?!”
Me – Yes

After 10 minutes of excited jumping and our 2 year old son wondering why his mother was jumping excitedly and deciding to join in, I partially spilled the beans in an attempt to salvage some sort of surprise for the trip. I told her we would be going to Australia, Singapore and Bali but did not mention anything about New Zealand and Tokyo other than the fact that they were surprise locations. The hotels were also left as a surprise along with the excursions. She accepted this answer but in the days and months leading to our departure, she would try to catch me and ask me what those secret locations were. Nice try! 😉

Finally, I wanted to give a shout out to the fellow FT-ers SFO777 and Short Hair Francis for helping making this trip possible. Without them, I would have massively struggled. Special mention to DavidO and his team for helping to book Amankila, Reef View and Shangri-La.

Credit is also due to the wealth of information on the Asia/Australia/New Zealand forums as it helped me to decide what to see and do.

That’s it for my introduction. Hope you like the TR! 🙂 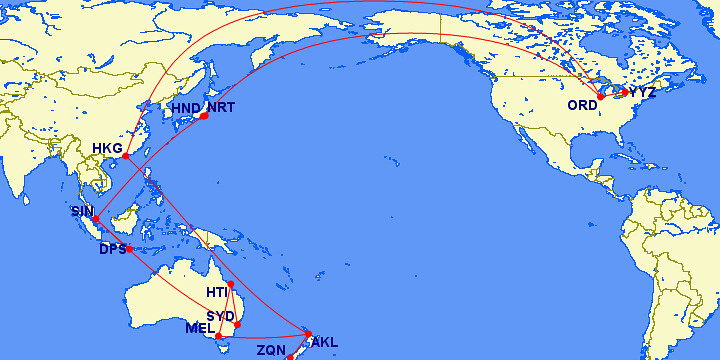